Reflections on Teachers’ day – We urgently need to fix education in Nigeria. 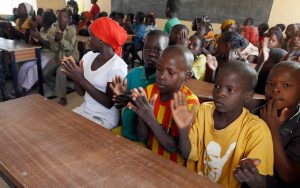 Most of my friends laugh when I reel out the name of my primary school. Hahaha. But I got a very good foundation from that local school in the 80s and attended one of the best secondary schools in Oyo State back then – Loyola College Ibadan. I had no problems settling into the school that was filled with kids from private primary schools. And there was a good mix of public school kids too.

I eventually left Loyola College for School of Science Ile-Ife, also a public school for selected students from SS1 to 3. We had teachers with PhDs in School of Science Ile-Ife. Our Chemistry teachers came to class without notes. We had Baba Biology who explained the human skeleton in a way that I still remember till today. When he explained Adrenaline to us, I can still hear it clearly now.

We had committed teachers. My parents were both teachers. They were committed. But ridiculed with poor salaries. I knew I never wanted to be a teacher. I didn’t want to go through the same struggle they went through. Two generations should not do that. It was hard for the teacher to be taken seriously in the society. True life story.

And the above was the reason any ambitious human being who grew up knowing what teachers went through would not decide on that profession. Just a few decades ago, people actually decided to become teachers. By the mid-90s, it was something that you were forced to take because you had no choice. And that was when we started seeing secondary school teachers that failed primary 3 examinations.

A public school teacher will most likely pray to God to enable her/him afford private schools for their wards. I went to my mum’s school. Something changed totally in the early to mid 90s. And it kept getting worse. I know we are in an unprecedented educational chaos. It is so bad that it should keep all of us awake at night.

We have failed the generation from around 1993 till date – especially the ones that cannot afford quality private schools. The public schools are so bad and this caused an upsurge in the number of very bad private schools. It is heartbreaking.
I do not believe the government has an answer to this big problem. I believe that technology is the answer to the problem. We need to exploit the use of technology in a creative way.

Teachers: We cannot produce quality teachers overnight. It is a long process. This is where Technology comes in. We need to find a few quality teachers and replicate them in classrooms using technology. Beam both Live and recorded classes in classrooms. Record classes in mother tongues, Nigerian accents, simple English, etc. The teachers in the classroom would just become more of facilitators and will be forced to learn too.
I have used Khan Academy, Udemy, Coursera etc at various times. This is the future of education. One quality Python (A programming Language) lecturer has reached thousands of students globally on Udemy. Just picture if he was trying to do it in a physical location. It won’t scale. This is the way to innovate and solve this problem.
Yes, it will need some infrastructural investment but it is possible. You don’t need Internet for everything. Classes can be played, paused, rewinded via DVDs and projected on screens. If you have Internet, also great.

Individuals can adopt their old schools, come together to do a pilot. There are already some materials online but long-term development of learning aides locally would be the winner. There many other issues but we can start with the teacher/curriculum one whilst the rest also get the right attention.

I am going to spend some time writing a framework that describes in detail what I have painted and how to implement it. I hope this Facebook post has sparked something in you. We really need to fix education. And it is our collective responsibility.

NB: I eventually became a teacher. Yes, it is formally in a tertiary institution at the post-graduate level but it is not my day job. And I love it. I love sharing knowledge. It is a passion.